After twenty years, the vivacious Swedish artists have decided to end their fruitful feather and glitter adorned career. In spite of obvious 70s influences and a fashion sense to match, The Ark are much more than merely a relic of some short-lived and now almost forgotten period in rock history. Quite the contrary – the boys have breathed new life into glam rock and their lyrics sent it on a mission it never seemed to have before. The band first came to widespread attention in 2000 with the now legendary It Takes a Fool to Remain Sane, which catapulted them to Scandinavian stardom for the whole decade to follow, with occasional songs also climbing the charts outside the cold countries of the North. That happened, for example, in 2007, when they represented their country at the Eurovision Song Contest with their upbeat song The Worrying Kind and managed to liven up the abundance of semi-naked female chests with a silver-and-feather clad male one. The Ark have always walked the fine line between the colourful, flamboyant Nordic pop and darker influences of more alternative genres, which resulted in an interesting mixture of overly playful, disgustingly cheerful and over-the-top melodies and much more melancholic, but still encouraging lyrics. Seeing as most of today’s music is either visually appealing and devoid of all meaning or tiresome self-pitying, it is commendable that these six musicians have found their winning formula in aestheticizing the message; there’s nothing quite like a song on the importance of following your own beliefs when accompanied by sumptuous pop and an outfit that would not be frowned upon even in the most hardcore of Berlin’s S/M clubs, followed by a love ballad in high-heeled boots and white shorts, to say nothing of the baroque lace.

The band are currently touring for the last time and have also made a stop in Milan to say goodbye to our Western neighbours in their own unique way. From the moment the leader of this dazzling procession, the openly bisexual singer Ola Salo, walked on stage in all his glory and with an air of intentionally exaggerated boastfulness, hands went up and numerous voices sang along in the language they are so famous for struggling with, the all-encompassing euphoria lasting until the very last chord. The band started the set the traditional way, with the first song off their first album called Hey, Modern Days, followed by the powerful anthem Clamour for Glamour and another call for independent thinking entitled Echo Chamber. We were also treated to hits such as One of Us Is Gonna Die Young, the LGBT favourite Father of a Son and the aforementioned manifesto of the band It Takes a Fool to Remain Sane. A farewell tour naturally calls for the most recognizable and well-known songs and The Ark were very much aware of that, consequently mainly playing older songs, some of which were presented as new versions.

This year The Ark released Arkeology, an overview of their career which includes an interesting new song called Breaking Up With God. It is interesting because the band’s beginnings were very much inspired by questions of religion, but also because Sweden is probably the only country where one can perform during the national Eurovision competition with a song that appears to promote atheism so shamelessly, especially when one has just performed an on-stage change of clothes from a military uniform to a white creation with little mirrors worthy of Brüno himself. “I’ve had it with shame, I’ve had it with sorrow,” sings Ola in dealing with his religious past, spinning around the stage and letting us know that he wants to find his “heaven alive” and just “dance the night away”. And that is exactly what we should admire most about The Ark. They approach what would usually be controversial and problematic topics with seeming lightness and music to match, which not only ensures originality but also transports these topics into environments in which they would not usually appear. Can you imagine someone triumphantly singing “And I may be gay, but I can tell you straight away, that I’ll become a better father than all of you, anyway” at Mario’s [a popular Slovenian TV show] on a Saturday night? Not a chance.

What makes The Ark so special is also their admirable talent for self-irony and the consequential questioning of whether divisions such as popular/alternative, tasteful/exaggerated, and even male/female make any sense at all. There’s also an additional value in that even if you are unwilling to see any of their messages, you’re still in for good music, catchy tunes and one hell of a show. The androgynous singer, in our case sporting a short haircut but certainly not giving up on make-up, is always in control of the situation but knows better than to take himself too seriously. His every move demonstrates that he has learnt show business from the masters, from David Bowie to Freddie Mercury, while probably having watched Saturday Night Fever once too many as a child. He appears to be on different parts of the stage at the same time, shakes his hips, waves his arms and confidently struts around. He changes his outfit three times during the performance, expertly handles the feather boa someone had thrown on stage and after a mini-striptease and some cartwheels towards the end of the show he finishes off by becoming a human fountain. The man knows exactly what he’s doing, and he loves it no end. As do the tremendously excited passengers on this ark of all those who feel that they are somehow different, and who have recognized the extravagant Swede as their messiah. The ultimate triumph of “sincere artificiality over artificial sincerity” may be drawing to a close, but you were wrong if you thought The Ark would go without a bang.

You can read an interview with The Ark’s lead singer Ola Salo in the next issue of Narobe. Photo: LiveClub (c) 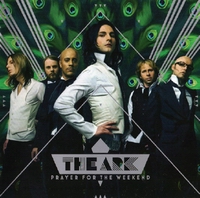